A friend of a friend of mine is now in Iraq. She was forwarding me his group emails and now he has given me permission to post some excerpts from his group emails home. He has also said that he is willing to answer questions from anyone as long as they don’t violate security clearances. For the moment we will call him simply David and if you want to ask him questions you can post them as comments under these posts.

I agreed to let Chris publish letters that I intended to write to my friends. Chris is a friend of a friend . Chris is very opinionated, which is a good thing. I believe you should be passionate about things.  I didn’t realize how passionate he was and I feel I am obliged to let his audience know where I am coming from.

There is a saying , ” if you don’t like this country than you can get the hell out.” That is bullshit.   It is our civic duty as Americans when things are going to hell to make things better. That is why America is the best country in the world, we can debate these issues without fear we will be silenced, we can protest and march and not fear we will be incarcerated.  We have the freedom and vote to elect people and have our voices heard.  Do not forget that these liberties are only enjoyed and realized in a very small minority of the world. Do not forget how fortunate we are as Americans.  I noticed Chris pointed out some sad but accurate truths about America that was accompanied with a picture of military veterans burning an American flag.  My response to that as a fellow soldier

When I see someone burn the flag,  I am not upset. A Burning flag to me is the ultimate sign of the freedoms we have. Only in America, the land of the free can you burn the country’s’ flag.   If you burned the Chinese flag in China you would end up in some underground prison, if you did it in communist Russia you would be sent to a gulag. If you did it in Sadaams Iraq you would be tortured in one his chambers (I have seen them). Only in America do you have this freedom,.   As a soldier I fight for and die for what the flag represents,   if we strip away the basic freedom and liberty from the flag its just meaningless colours and stripes and a memory of what it once was. Freedom is not free, my brothers in arms have laid down their life for the freedoms most Americans take for granted but we would be doing those fallen soldiers more of a disservice to let our basic rights, the freedoms they died for, be trampled on in the name of fervent patriotism.  This is the reason I have no problem allowing my writing as a soldier in the US Army to be on a site such as Chris’s.

Most importantly, know this, America is its people. Its not the minority of politicians in DC running it.  We are America.  Those slings and arrows we shoot are in actuality at our own neighbors, our own family, and ourself.  We can not detach ourself from this country.   We can not blame the ills and faults that have befallen us on an abstract idea of America.  We are America and the enemy is real, the threat is real. I work intelligence I see it everyday.   The enemy hates our tolerance of others, it hates our freedom to think for ourselves, it hates that we have separation of church and state.  It hates that we can have debate on issues.  Let us not let them win by taking away the freedom of thought and debate. 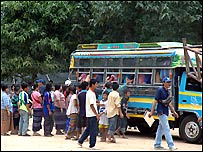