TOKYO (Reuters) – Police found a stun gun and tear gas Friday at the Tokyo home of a man who said he persuaded 11 younger women to live with him by chanting a spell, media reports said.
Police suspect he used the weapons to prevent the women, mainly in their 20s, from leaving, the reports said.
Hirohito Shibuya, 57, was arrested Thursday for allegedly threatening a 20-year-old woman who was reluctant to join the commune by telling her that if she left she would be turned to mincemeat, they said.
He denied threatening the woman, Kyodo news agency said, adding that he also allegedly told her he was a former senior officer in Japan’s military with secret agents around him.
Shibuya, a bald, rotund man with bags under his eyes, has attracted heavy media attention this week after claiming he chanted a spell to attract the women.
He had married and divorced several of the women, who continued to live with him, the reports said.
Asked what the incantation was, he told a newspaper: “When you say it, even unattractive men become attractive. But I won’t say it because if I do, I’ll die.”
Police confiscated several books on hypnosis from his home, Kyodo said. 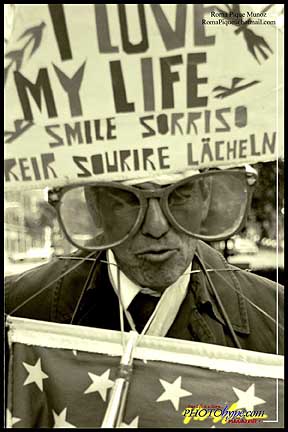