If Jon Stewart won’t run, maybe I will have to. IN 2008, I will actually be eligible for the first time.
cd

Stewart dispels rumor of White House run
NEW YORK – Those people wearing “Stewart/Colbert ’08” T-shirts can stop hoping — Comedy Central’s fake news stars have no intention of making a run for the White House.
Jon Stewart said the T-shirts promoting him and
Stephen Colbert “are a real sign of how sad people are” with the state of affairs in the country.
“Nothing says ‘I am ashamed of you my government’ more than ‘Stewart/Colbert ’08,’ Stewart told an audience Sunday at the New Yorker Festival. He was interviewed by the magazine’s editor, David Remnick.
Stewart, who recently hosted Pakistan’s president, Gen. Pervez Musharraf, on “The Daily Show,” said he’s been trying to get top Bush administration officials to appear. “We have requests in there to everyone including Barney,” Stewart said. “Only Barney replies.” Barney is the president’s Scottish terrier.
Stewart scoffed at suggestions that some people actually get their news from “The Daily Show.”
“There’s no way you could get the news from us,” he said. “I’ve seen the show. It couldn’t happen.” 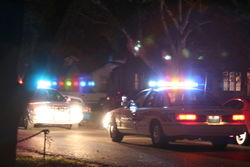