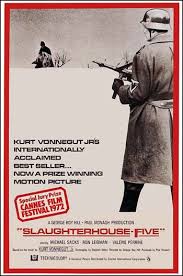 Slaughterhouse Five (the film)-
A Review by Vago Damitio

This wasn’t a terrible film. It seemed to stay fairly true to the book, however, they did a fairly bad job of making Billy Pilgrim age effectively. This was distracting. Pilgrim was perhaps a bad job of casting, though the actor’s expressions were sometimes fun, though again, not particularly convincing. The bombing of Dresden though was a homerun. The director did a superb job of showing that Dresden was a beautiful city of arts, a peaceful city in the midst of the German war machine, and finally, a pile of rubble filled with 150,000 innocent dead. This, I believe is main point of both the movie and the novel. The secondary point of time being one continuous non broken continuum was also made, though this was done in a bit more of a didactic and belabored manner.

As a bonus…here’s the entire film..

6 thoughts on “Slaughterhouse Five (the film)- A Review”

Film on Film as Life on Life