Nicholas Negroponte, the co-founder of the Media Lab at the Massachusetts Institute of Technology, detailed specifications for a $100 windup-powered laptop targeted at children in developing nations. Negroponte, who laid out his original proposal at the World Economic Forum in Davos, Switzerland, in January, said MIT and his nonprofit group, called One Laptop Per Child, is in discussions with five countries–Brazil, China, Thailand, Egypt and South Africa–to distribute up to 15 million test systems to children.
Slashdot | MIT Unveils Prototype for $100 Linux Laptop 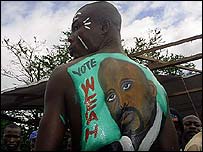